I graduated from Georgetown Law with over $200,000 of student loans, but the true gravity of my student loans didn’t hit me until a few months after graduation.  It was only when I started receiving an onslaught of letters in the mail with unfamiliar terms, like “grace period” and “forbearance”, that I started to panic.  That’s when it began to feel real.  I realized I had no idea what my obligations were, who was servicing my various loans, what the interest rates were or how to even make payments.  I’m ashamed to admit that, until that moment of panic, my student loans had just felt like monopoly money.

I was about to start a very well paying job as a corporate lawyer.  While I worked hard to be top of my class my first year to secure that job (while bartending until 2am many nights to help with school expenses), much of it was luck–there were so many people far more deserving of that job.  I knew that I was in an incredibly fortunate situation, as that job would make paying off my student loans much easier.  Still, I felt overwhelmed.  I was embarrassed that I knew so little about my student loans, but I knew I needed to get control of the situation if I was ever going to achieve my goal of eventually starting my own company.  That week that I had this panic-induced revelation, I spent over 60 hours scouring the internet for everything I could learn about student loans.  By the end of that week, I had formulated an action plan for how I was going to pay off my student loans.  Here are the steps I took and the action plan that I followed:

The first step I took was making a conscious decision to start paying off my student loans aggressively.  I was overwhelmed and intimidated by them: I had around $216,000 in student loans with an average interest rate of 6.79%.

I knew that if I didn’t start tackling them aggressively, they would just loom over me indefinitely and the interest alone would continue to absorb a large portion of the minimum payment each month.  If I hadn’t made this conscious decision, I would likely still be blindly making the minimum payment of $2,485 each month for the standard 10 year repayment term without actually being in control.  Over the 10 year repayment term, I would have paid more than $82,000 in interest alone, bringing my total repayment amount to almost $300,000.  It was clear to me that in order to achieve my goal of starting my company, I had to make payments far exceeding the minimum payment requirement.

To get a clear picture of my student loan situation, I listed out each of my student loans: the loan amount, interest rate, type of loan, loan servicer and any information on the grace period or forbearance period.  It was important for me to see all of this information in one place, since it was difficult to figure out all of the loans I had just through the various letters I received in the mail.  The best resource I found for this was http://studentaid.gov.

Through this process, I found out that in total I had 9 different loans, 3 different types of loans (Perkins Loan, Graduate PLUS Loan and Unsubsidized Loan), serviced by 2 different companies, with 9 different interest rates.  This was all new information to me, simply because I hadn’t put any thought into any of this as a student.  It was incredibly helpful to be able to see all 9 loans listed out in a clean chart that I created.

I had a major breakthrough by doing this process.  I used the Student Loan Hero calculator to figure out that with my average interest rate of 6.79%, I would be paying almost $700 on interest alone every month!  I knew I needed to consider refinancing my student loans to reduce the interest rate.  Through this process, I also found out that for all but one of the loans, the grace period or forbearance period was ending in about a week–which explained the onslaught of letters in the mail. 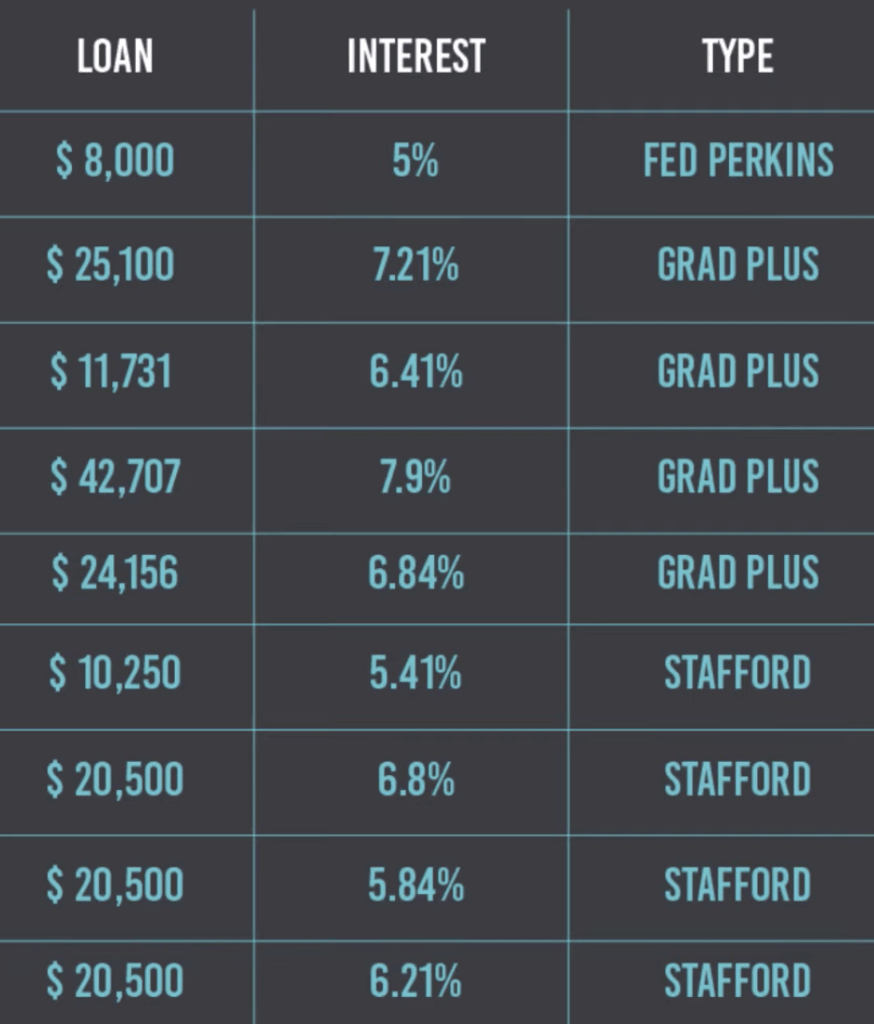 I decided to refinance my student loans after doing research on the pros and cons of refinancing.  One of the major downfalls of refinancing is that you lose many of the protections that federal loans offer, but I felt comfortable taking that risk, since to me it was outweighed by the thousands of dollars I would save in interest.

The next decision was whether I would refinance all of my student loans, or selectively exclude some.  Through the process in Step 2, I discovered that my Perkins Loan was in a grace period for an additional 5 months and would not start accruing interest until the end of the grace period.  As such, it made sense for me to exclude this Perkins Loan from the other loans that I would be refinancing, with the idea that I would pay off my Perkins Loan before it ever started accruing interest.

I repeated this process a few times until neither lender would go down any lower.  Through these simple email exchanges, I was able to get Earnest down from 4.37% to 3.84% (the equivalent of almost $3,000 in interest saved).  I ultimately opted to refinance with SoFi because they were able to offer a larger cash sign-up bonus (although I did somehow convince Earnest to offer me a $200 sign-up bonus and a $300 brunch reimbursement).

$100 Bonus for Refinancing With SoFi

Earn a $100 welcome bonus when you refinance your loans with SoFi.

$100 Bonus for Refinancing with Earnest

Earn a $100 welcome bonus when you refinance your loans with Earnest.

After I refinanced, I set a goal for exactly when I wanted to be student loan free, so that I wasn’t just aimlessly chipping away at my student loans with no end in sight.  I knew that if I continued to live the same frugal lifestyle that I lived as a student, I would be able to put around $9,000 each month towards my student loans.  Based on this amount, I set a goal that I wanted to pay off all of my student loans within 2 years from starting my job.  Setting this 2 year goal was motivating–it gave me a concrete finish line and something to look forward to.  Knowing that I had to continue to pay a certain amount each month to meet my goal also prevented excess spending.

5. Create a Budget and Track Your Expenses

To stay on track with my 2 year goal, I created a budget and tracked my expenses.  To reach the goal, I had to save over 80% of my paycheck (around $9,000) each month to put towards my student loans.  Around $3,000 would go towards the minimum payment, and the rest would be directed as an additional payment.  I sent standing instructions to SoFi to apply every additional payment I made entirely towards the principal of the loan, and not towards any interest.  This was to minimize the interest I was paying, since reducing the principal amount is how you can lower your interest payments.

Every pay day, based on how much I was able to save during that 2 week period, I would direct an additional payment towards my student loans.  I would then go into my “Loan Pay-Off Schedule” excel file and manually update it with my bank balances, paycheck amount, and the additional student loan payment amount I made.  This was my routine every 2 weeks for the 2 years.

I tracked my expenses closely to stay on track with my target of paying around $9,000 each month.  Tracking expenses also helped me to identify and cut out unnecessary expenses, spend more intentionally and prioritize where I wanted my money to go.

If there were unexpected expenses and I couldn’t meet my $9,000 target, I would make up for it the next month.  For a large unexpected medical expense I incurred, I found ways to cut down my spending even further and increased the payments over the several months to make up for it, so I could still stay on track with my 2 year timeline.

I knew that the biggest trap that most people fall into right after graduation is lifestyle inflation, where you’re increasing the amount you spend as your income goes up.  This lifestyle inflation can often creep up gradually–you start eating out for lunch or taking Ubers to work–and eventually become part of your normal routine.  My secret to preventing lifestyle inflation was to never allow myself to think that I wasn’t still a broke student.  I was so determined to save over 80% of my income so that I could pay off my student loans that I tried every savings technique I knew: I gave up Starbucks, I walked to and from work, I packed my lunch most days, I took advantage of free meals at work when they were offered, I stopped buying holiday gifts, I traveled only using credit card points and more.  Perhaps the most drastic measure I took to reduce my expenses was that I didn’t buy any new clothing over that 2 year period.

By setting and prioritizing my 2 year loan pay-off goal, sticking to a budget, and lowering my interest rate through negotiating with various lenders, refinancing and re-refinancing my loans, I ended up paying a total of $225,526.77 on my student loans.  Had I not refinanced and just contributed the minimum payment for a 10 year period, I would have paid over $72,000 more in interest (for a total of $298,125).  I feel incredibly fortunate that I had a job that made this 2 year timeline possible, and am excited that I am finally now able to pursue my dream of building Plug and Law, a legal company to help entrepreneurs and online business owners.